Honolulu is an ideal city for human powered movement. The majority of the city is shoved into a two-mile wide strip of flat land between the ocean and the mountains. 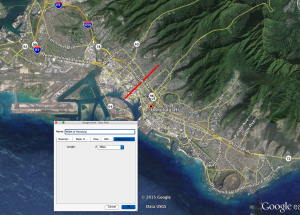 Illustration of how narrow Honolulu’s Core is – from Google Earth

The Island maxes out at about 50 miles wide, with most of the further parts of the island being relatively uninhabitable. This means that the majority of the livable land on Oahu is within a 20 mile bike ride of Downtown Honolulu. The most populated sections are all within about 10 miles. Honolulu also has nearly perfect weather. It’s sunny and above 70 most of the time, but also below about 85. All this being said, its astonishing they have not made a serious effort at making cycling work there. 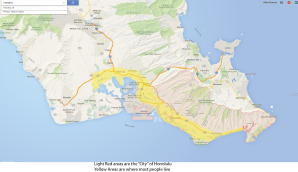 There are very sporadic bike lanes in the city, despite it being largely flat and pleasant. What they do have in abundance however, is 6-lane wide boulevards. They exist about every 1/4 mile. (at least near Waikiki and Ala moana – Downtown as well). With roads that wide that often, you’d think they’d never have traffic, and you’d be wrong. My dad and I biked from the airport on one of our leisure days faster than it took the bus driver to get us from the airport to waikiki when we first arrived. it was pretty astonishing how slow traffic moves on the island. Part of the problem is that honolulu’s core is really is only 2 miles wide. This constricts all northwest/southeast traffic through the city to a handful of routes (H1, Beretainia/King, Kapiolani, and Alamoana/Nimitz) (so there are about 15 continuous lanes each direction on that axis, which is the main axis of travel for the island.)

This city is also the absolutely ideal case for a rail transit line. Even for those who argue that rail is bad because it is fixed and can’t follow development, Honolulu makes the case for rail, because it is only 2 miles wide, you put a line down the middle of it, and development Cannot ever get more than a mile away even if it tries! Honolulu is building such a train line right now, but its incredible that it took them this long to get around to it. It is the only city I have been to that is less radial than Seattle or San Francisco or even Istanbul.

One of the problems with the city’s highways are that they all come to a bottleneck between the airport and downtown, where the only connection point is a 12 lane (each way) double decker highway/freeway that is absolutely ridiculous. 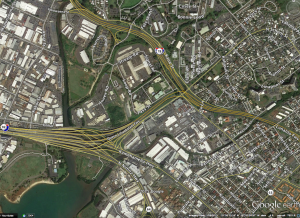 This being said, it seems like the city would do extremely well for itself to both build the train line it is building, and to create a segregated bike-highway that goes the length of town down the middle, with connecting bike lanes perpendicular to it every 1/4 to 1/2 mile.

Honolulu also suffers from a really messed up grid. it “has a grid” but the grid wobbles and wavers as if the person who drew it was completely drunk. There are many discontinuous streets, and confusing streets. There are also many canals through the city that they chose not to bridge frequently enough, making their already bad chokepoints worse. For example: Waikiki is separated from the city by the Ala Wai canal. There are three bridges across the canal, and they are all at the north west edge of Waikiki, to cross North/Northeast into the city you are forced to travel to either end of waikiki, you cannot simply cross in the middle. This both forces people to drive what should be a short walkable distance, and discourages walking because distances are magnified by a lack of access. Honolulu needs more bridges over its canals – Like the Chicago Loop – Bridges on every street. 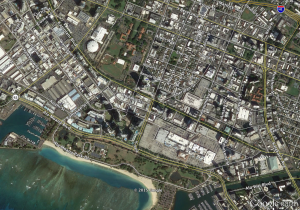 Do you even grid? – warped grids in Honolulu, from Google Earth

The buildings (at least around Waikiki) Are well designed though, and I commend the city for that. They are designed just like in Istanbul – tiny stores in the bottom, towers above, if there’s parking you don’t see it. Excellent design. 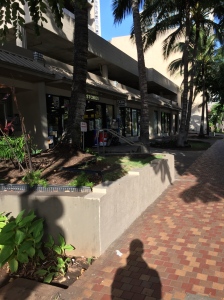 Small shops on the bottom floor – a minimal parking garage visible, beautiful sidewalk landscaping, and a tower above

And in the tourist parts of town, the sidewalks are wide and well adorned. However, wander into the locals’ parts of town, and this is not at all the case. There are also many All-way walk cycles along Waikiki, which are great, but!, they don’t let you cross when traffic in the direction you want to go in gets a green light, which was very confusing. You have to wait the 40-50 seconds for the all-way walk cycle, so in the end, you don’t end up saving any time with it – and its more superficial than useful.

In general, the car culture in Honolulu is very ingrained, and it shows in the infrastructure. The main mall has 6 lane streets that begin/end inside its parking garages (Ala Moana Mall).

The city’s downtown streets are incredibly wide, and hostile to pedestrians and cyclists. Sidewalks outside of Waikiki are not maintained well, and are narrow.

The city’s architecture is quite gorgeous on the whole. There are lots of beautiful reflective glass towers, and lots of really plain residential skyscrapers that are beautiful in their efficiency. 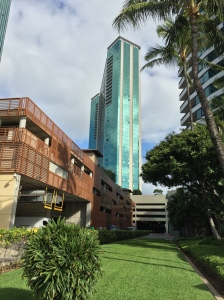 It also has more square buildings than I’ve ever seen in one place in my life – They must have some strange land use regulations that make squares more economically efficient in Honolulu, because they are usually pretty inefficient as a high-rise residential form.

A square residential Tower near Waikiki

I was also really surprised at how few people were out walking on the streets outside of Waikiki. Despite being in a dense city, the sidewalks were almost empty in the early evening. It was Christmas Holiday, but – in my experience, in Seattle and Chicago – that’s never stopped anyone from being out and about in the city – and both of those cities are much much less pleasant outside at that time of year.

My thoughts on Life, Urbanism, Transit, Transportation, and Architecture