I very frequently consider the idea that perhaps building urban rail lines separates neighborhoods as much as the freeway does. It stems from me deciding I have to be honest with myself, and consider that maybe the rail line does the same thing the freeway does in this respect. My friend Ryan sent me an article, written by someone in Minneapolis who clearly hates their light rail, and is trying to find arguments against it. http://www.minnpost.com/community-voices/2014/10/superhighways-and-light-rail-antagonists-or-evil-twins

Each time I consider this idea, I think about the Northside Mainline in Chicago, 4 tracks, side by side, carving up the greatest neighborhoods in Chicago,

and all they do is provide shade to sit under, or protection from the rain under which you can wait for a bus.

Honestly, the Northside Mainline is the lifeblood of the city. It moves ~200,000 people per day in a 50 foot wide space. 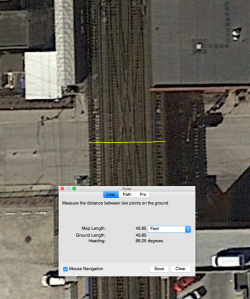 In comparison to say, The Dan Ryan Expressway,

moves about 200,000 people per day (counting all the passengers on busses ~60,000), and it does this in about 110 feet of space, torn out of the middle of a park… Lake Shore drive also does not have the safety features of most modern freeways, there are no shoulders, the lanes are very narrow, and the median barely exists. The typical modern freeway takes up about 250 feet of space, ballooning to around 400 at interchanges(off-ramps to city streets).

Lake Shore drive is about the maximum width of space I’m willing to cross as wasteland. And frankly, I think I’m only willing to cross it because I am forced to every day because I happen to live East of the Drive. I really don’t like crossing it at all because even Lower Lake Shore is full of freeway-speed cars, and people who just don’t care to realize they’re on a city street.

On the other hand, I’ve wandered in and out crossing the rail lines willy nilly with nary a thought of passing them. The only thought I have is; “oh cool! a train passing overhead!” None of the urban rail lines in Chicago have ever caused me to consider wether or not I would cross them to get somewhere. Especially not the subway lines, which have absolutely no impact on the ground plane. This feeling is not the same with the expressways. I’m very reluctant to cross the Dan Ryan Expressway, from IIT to Bridgeport. Walking across 500 feet of highway is just not appealing. That’s a full minute of walking where it seems like I am going absolutely nowhere, and it might be acceptable if there were things immediately on the other side, but no one in their right mind locates their establishment immediately adjacent to a 14+6 lane monster-freeway, so if we’re realistically talking about going somewhere on the other side, its two blocks of wasteland IIT campus within no attractions(except class…) a wasteland of wide freeway, and then another block or two of residential only until I get to something I might actually stop at (stores, restaurants, etc.).

This means that in my 6 years of attending IIT I’ve crossed the Dan Ryan on foot about as many times as I have fingers. And lets be honest, I’m way more ambitious about walking places than your average citizen. Rail lines don’t create wastelands on either side of them. In fact, the busiest, best shopping corridors intersect rail lines. there are restaurants, bars, and shops built almost on top of the rail lines, things are built so close in fact, that on the occasion that one of them goes up in flames, the entire rail line gets shut down as a safety precaution. I actually took a ride from my friend Ryan, mostly because I didn’t feel like crossing the Dan Ryan on foot at Roosevelt. (The other part of that decision was that I didn’t want to get there far later than my peers, but both factored in).

All of this is to say, that, for CTA rail, I don’t think it impacts the city in at all the same way a freeway does. Freeways completely disrupt the urban fabric, and divide neighborhoods horribly, and Urban Elevated and Subway lines do not. Now, Metra in the City of Chicago is a different story. Our regional rail system here in Chicago is built on embankments all over the city. These embankments form the lines between neighborhoods in many cases, and due to their construction as solid fill embankments, rather than the clear and open steel viaducts of the CTA, they do indeed form walls, however, they also tend to get no wider than 45-60 feet

(except near downtown where freight lines and multiple metra lines come together, but this mostly happens in industrial areas – and less so in legitimate residential/commercial neighborhoods). Metra lines due to their construction style do create a visual barrier in a neighborhood, and as metra doesn’t stop in the city mostly, they’re useless to city residents, and neither provide connectivity, or vibrancy. The metra lines operate far more like freeways in this sense, shuttling suburbanites past the city, and into the gleaming loop for work, turning their backs on the city as they travel through it. Despite their worse design, they still do not create the same level of obstruction as a freeway. I can think of many places where I cross metra lines without really thinking about it. It’s more like walking through a city-gate than crossing a street (if Metra is the City-Gate, and CTA is like crossing a street). They do not form obstacles to my biking through the city, or my walking through it.

The last form of urban rail – Light rail is also worth discussing, as this was the original subject of the article that prompted me to write down my thoughts. When I consider Seattle’s Light Rail, it was built in elevated sections

(which like the L, have no effect at all on the pedestrian experience/connectivity, in my opinion – in fact, they create a landmark that makes it easier to gauge progress along a street by). Some sections are a subway

(Beacon Hill, Downtown, U-district), and this part has no effect on the pedestrian environment, except to provide a relief from being a pedestrian now and then, and offer a lightning fast ride from where you are to where you want to be, for almost no money. The third form it takes is the at-grade alignment, where it doubles with a street, or slips down an alleyway next to a transit way. These two conditions (Martin Luther King Jr. Way, and the SODO/E3 Busway) are interesting to discuss. The MLK segment took a wide road, and stretched its width, making it longer to cross on foot – though, at the same time, it added pedestrian islands in the middle of the street which made it easier to cross, even if it takes longer now. 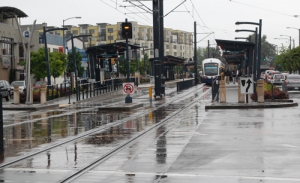 The other thing the light rail did in this corridor, was to spur development. But, it didn’t just spur any kind of willy-nilly development. It spurred the kind of development that fronts the sidewalk, and doesn’t hide behind acres of parking. It spurred the kind of development that encourages you to walk to it, and window shop, and generally enjoy your time walking and shopping. I think this benefit, far outweighs any widening of the street to accommodate the rail line! Creating a pedestrian environment, by making a destination for pedestrians (a station) vastly improves the neighborhood for everyone, and ties it together far more than it tears it apart. This is where freeways and rail lines defer so much. The freeway creates a mass of noise, and hell and pollution that no one wants to go near with a 1000 foot pole, let alone walk around in. The rail line accommodates a quiet train that comes once in a while, and creates basically zero pollution. It ferries people to stations in great numbers, providing an audience for a lively retail and restaurant area. Freeway exits just encourage gas stations and strip malls, which further divide a neighborhood, enforcing that everyone must drive to be comfortable. It doesn’t matter in that neighborhood if they build sidewalks, because even on the sidewalk a pedestrian does not feel safe with traffic whizzing by at 45 mph. And fighting drivers who pull in and out of curb cuts without a second thought for the pedestrian simply makes the pedestrian arm himself with the same 2 ton metal cage everyone else has for protection! The case of the SODO busway is an interesting one as well, as this is a heavily industrial area, where few people would ever walk anyways, due to wide roads, and no points of interest.

However, the rail authority included a bike/walking trail next to the rail line, and since the line is not in a street, it worsened no crossing distances. (it created a new crossing adjacent to the busway, but that was never a hard road to cross in the first place, it is hardly more than an alley).

Perhaps another example of how street-level light rail does not harm a neighborhood is the example of the N-Judah Muni-Metro Streetcar/LightRail/Subway line.

This line goes from San Francisco Station (Commuter Rail) through the financial district via the double decked Market St. Subway, and then takes off down Judah St. along Golden Gate Park and off to Ocean Beach. This line ferries passengers through dense housing areas on narrow streets to a myriad of restaurants and entertainment. The neighborhood is completely continuous across the line as it is on a street hardly wider than an alley. The streetcar/light rail/subway simply adds people to a vibrant and beautiful area of town.

So in conclusion, After considering a myriad of rail line types, and a myriad of freeway widths, my opinion is that rail lines have nowhere near the same divisive effect on an urban neighborhood as the freeways do. Rail lines add vibrancy, and sew together neighborhoods. Freeways destroy, pollute, and divide them horribly. I mean, when was the last time you crossed a freeway on foot and enjoyed it?!

My thoughts on Life, Urbanism, Transit, Transportation, and Architecture